September 16, 2016 by Orthodontist Catonsville in All blogs • braces

If you have braces, the discomfort of tooth movement or an archwire that is poking out can be solved with over the counter medication. Even putting the braces and appliances on is not painful. So fortunately, in the practice of orthodontics, anesthetics are not required.

However, in getting that beautiful smile and healthy bite, you might have to see a dentist to have a tooth removed. Thankfully, this is not the same procedure that it was many years ago. Dental anesthesia has come a long way so that the old fashioned pliers and pull routine is not the way it is anymore. But the history of teeth (and their removal) is one that brings up some painful memories.

So How Did Anesthetics Come Into Being?

The first publicized use of anesthesia (from the Greek for “without sensation”) was actually by a dentist in 1846. Using ether that he had in a flask, William Morton, a Massachusetts dentist, safely removed a tumor from a patient’s neck with no recorded pain! He called it Letheon (after the underworld’s river of forgetfulness, Lethe). He later adopted the word anesthesia from a letter written to him by a physician, Oliver Holmes.

There are two different types of anesthesia—general and local. General Anesthesia, as the name implies is a full-body anesthetic that puts the patient to sleep but more importantly completely unconscious. The anesthetic stops pain from being transmitted but has no effect on unconscious physical activities like the heartbeat or breathing.

Local anesthesia, usually an injected liquid, stops pain transmission in a relatively small cluster of nerves so that only that area is affected.

How Does it Work? 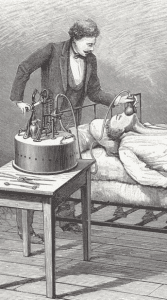 The exact way that general anesthesia works is still a bit of a mystery to medical science, but local anesthetics work by blocking the transmission of positively charged ions that transmit the pain from one nerve cell to another (called the sodium channel) in the region around where the drug is applied.

Numbing the body or brain is not a new phenomenon. There is a long history of humankind trying to minimize pain for a host of afflictions and illnesses.

One method used by the Egyptians and Assyrians, believe it or not, was to cut off circulation to the brain temporarily, causing the patient to pass out so that minor surgery could be performed.

This was used as far back as the mid-22nd century BCE to help soothe the pain of things like toothaches.

This is in the same family as Henbane and was widely used in the ancient world to induce sleep and manage pain.

Yes that hemlock. It’s paralyzing qualities were used in small amounts when making mixtures to help reduce pain by removing the

This flower is the base of opium which has euphoric effects and helps to relax the user in the short term—useful for temporary pain reduction.

This compound of ethanol and sulphur has been around since the mid-1500s. It was widely used as an inhaled gas for surgical purposes in the mid 1800s. The correct dosage was not particularly scientific so in many cases patients were given too 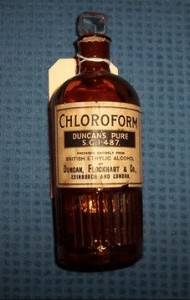 Another mid 19th century discovery, it was used in childbirths as well as for dental procedures, but it was difficult to control the amount needed and was dangerous to use. Often it was poured into a cloth or rag that was then placed over the patient’s mouth.

Laughing gas was discovered in the late 1773, and was used as a recreational drug before its anesthetic qualities were fully appreciated and it wasn’t used as an anesthetic until almost a 100 years later.

In modern dentist practices, the doctor will often rub a topical (on the surface) anesthetic onto the area where they will make the injection so that the needle doesn’t hurt.

After its discovery in the late 1800s, this was one of the first widely used injected anesthetics.

This South American poison used on darts and arrows was renowned for its ability to paralyze, was used as an early injectable anesthetic.

Synthesized in 1934 this was the first intravenous anesthetic.

Another opiate, this was used more for pain management than to stop pain before it starts. It had a lot of downsides and not used extensively.

There are now an extensive list of different types of anesthetics that are available to doctors. The type and amount is selected based on a number of different factors like height, weight, age, type of procedure and if there is a previous reactions to anesthesia.

What Is “Accelerated Orthodontics,” And How Does It Work?